Building more houses is not going to reduce house prices much (although it will help more people to be decently housed). The inflation driver is financial speculation based on leveraged borrowing. Until that is addressed, house prices will continue to boom. 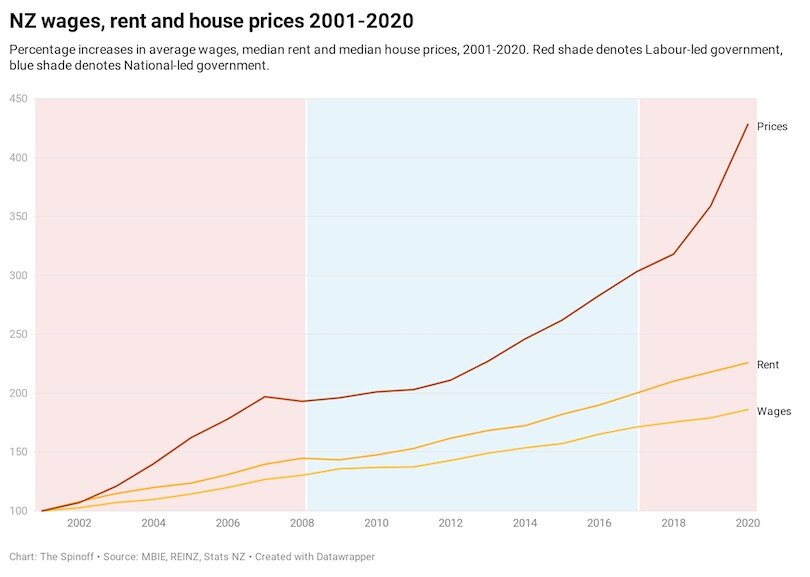 Policies based on theories which do not fit the facts are not going to work. Thus it is with most of the suggestions to control houses prices. The most salient fact about house price inflation is illustrated in the shown graph. (It comes from Duncan Grant published in Spinoff.) Since 2002, house prices have been rising substantially faster than rents and wages and consumer prices. There have been two bouts of very rapid house price inflation but there was stagnation from 2008 to 2012. (For a longer but not as up-to-date series.)

It is difficult to explain this graph by claiming we have not been building enough houses. We did not suddenly slow down house building in 2002, speed it up during the GFC and slow it down once the economy recovered from the global shock. (In fact construction fell after the GFC.) Certainly there is a housing shortage and we should be building more houses. But that will not have much effect on overall housing prices.

The faulty policy conclusion arises from a reliance on supply-side economics (which is part of the neoliberal framework). Of course one should pay attention to the supply-side of an economy (as we did in the previous paragraph) but we should not ignore the demand-side. Sometimes it dominates behaviour and has to be managed. Indeed, given that the disjunction between housing price trends and general price trends was evident by at least 2007 and attention solely to the supply-side has proved ineffective in repressing the prices for over a decade since, we might think to have learned.

Why have those prices been rising faster since 2002 compared to their past pattern? What changed then? There was an enormous injection of international liquidity following the Bush II tax cuts. That enabled New Zealanders to borrow more offshore, via their trading banks, greatly leveraging their housing equity. So the high house-price inflation is the result of a speculative spree financed by offshore borrowing. (It may not be coincidental that the housing price inflation seems to have accelerated following the Trump tax cuts.) Cheap interest rates have not helped.

When world liquidity closed down during the GFC, it became harder to borrow offshore, people became risk adverse and, not surprisingly, the speculative spree was retarded until the liquidity recovered in the mid-2010s.

Speculative booms are difficult to manage. They are not helped by tying one’s hands behind one’s back by ruling out a capital gains tax. That would both make the speculation less profitable and suck extra cash out of the speculative market, in effect reducing the amount of oil being poured on the flames.

Another approach is to reduce financial leveraging. That is what a loan-to-value ratio regime does. The difficulty is that borrowing is necessary for those purchasing a home for a first time. One way around this would be to have higher LVRs for such purchasing compared to the ratio for second home purchasers and those increasing their leveraging by upgrading their housing. While this might be difficult to administer nationally, the RBNZ is reintroducing a more tiered scheme and trading banks are tightening up their criteria for lending.

The neoliberal hands-off framework tends to argue that dealing with speculative booms is not a concern of a minimal government. While the social costs from speculating on a lottery, bitcom or a game may be negligible, once there is borrowing lenders will be exposed too. It is not so much the speculative boom that is the problem but the speculative bust which follows, especially the pressure from those collaterally hurt for taxpayer bailouts. Government stabilising the boom before the bust is prudential.

The neoliberal pays little attention to the distributional consequences of a speculative boom. Leveraged speculation is only possible for those who have some wealth (or can convince the financial markets they have it – Trump?). So during the boom there is an increase in wealth inequality. Practically that means that those low in financial wealth – as most of the young are – are excluded and cannot buy their own homes.

In the bust, the increased inequality may not simply reverse. Certainly some high flyers do badly but often it is those with a modicum of wealth who suffer, while those who were arranging the lending go scot-free.

For example, a lot of people invested their surplus savings in finance companies before the 2008 GFC and lost their shirts when it turned out that the companies were into high-risk investments. But most of those who managed the poor quality investment continue to wear collars and ties.

In summary, the government which ignores a speculative boom does so at cost to it, or perhaps its successors, and certainly to the economy as a whole.

I’ve not written a lot about the policies to quell the speculative boom; the above are chiefly to illustrate the underlying mechanisms. For all the public hysteria, the government may not have many policies available to it either.

If a speculative boom has been under way for almost two decades it is not going to be easily suppressed (except by a disruptive bust). Have you noticed that some of the loudest critics (including the National Opposition) did little when they were in office? (Which is not to ignore lamentable performances by some Labour Ministers of Housing; that excludes Megan Wood.) You only have to look at the way that the housing portfolios have been mucked around with – National split the supply and demand parts of the housing sectors – to see a shambles.

If this is a pessimistic prospect for housing – and, because of the sector’s size and importance, for the whole economy – at least this column has tried to provide an analysis consistent with the historical facts. However, policy proposals for this complex problem will be dominated by answers that are clear, simple, and wrong.